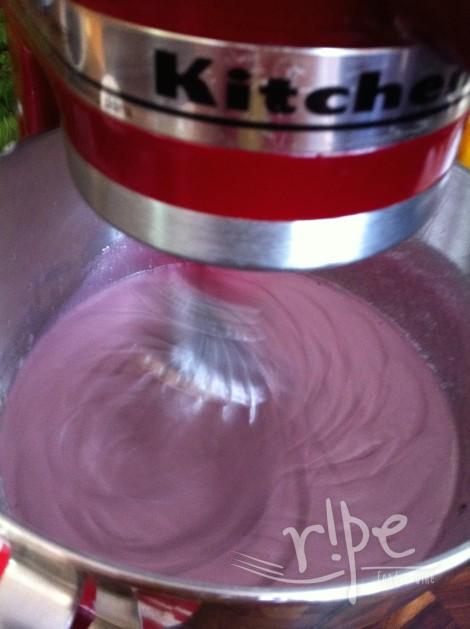 Below is our recipe for blackberry buttercream, the one my daughter mounded atop our white cupcakes and decorated with fresh berries and mint leaves.  Julia Child’s Italian Meringue from The Way To Cook (a thorough, beloved, yet challenging encyclopedia of good cooking) is my usual starting point (and also ending point for some cakes if we just want a marshmallow-y “boiled icing”, like this double chocolate cake), but I also adapted ideas from Nancy Kux’s Classic Meringue Buttercream from the Baker’s Dozen Cookbook.  I enjoy experimenting with adding jams and fruit syrups for part of the sugar to introduce natural fruit flavors and colors to buttercream.

To make the blackberry syrup, I thawed frozen blackberries in the refrigerator, then strained the berries from the juice to make a compote.  I didn’t want to toss the juice, so I boiled with equal parts sugar, as if I was making a simple syrup, like this recipe, only no hot chile peppers!

Yield: makes about 3 cups of buttercream