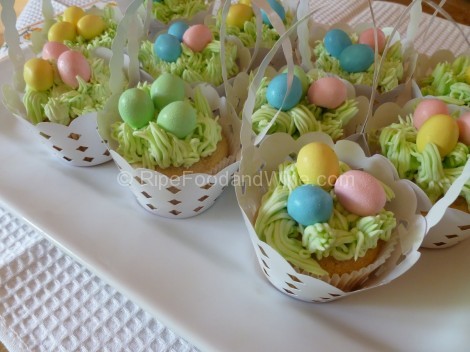 Real buttercream is good to have in your kitchen repertoire, even if it isn’t an everyday food.  Every now and then there’s a holiday that just screams for a special treat, like these Easter basket cupcakes.  (Usually I’m not so “Martha”, but I have an enthusiastic 8 year old who’s got me digging around in the back of the cabinet for my old cake decorating supplies like this “grass” tip and (gasp!) food coloring.)  Thanks to The Bakers Dozen & Nancy Kux, for the friendship, education and the best Classic Meringue Buttercream recipe ever!

1.  Set a frying pan with about an inch of water in it over medium heat to simmer.  This is going to be your “double boiler” of sorts.

2.  In the mixing bowl from a stand mixer, whisk the sugar, egg whites and water to combine.  Place this mixing bowl in the simmering frying pan of water and continue to whisk until sugar is completely dissolved and an instant-read thermometer reads 160 degrees F.

3.  Return mixing bowl to the stand mixer, fitted out with the whisk attachment.  Whisk on high speed until meringue is cool, glossy and forms stiff peaks, about 6 minutes.

4.  While machine is running, add the butter, 1 tablespoon at a time, being patient to let each butter pat get fully incorporated before adding the next.   Keep up the mixer-whisking until you have a beautiful, creamy frosting.  Add the vanilla and do a final whisk at high speed. Ta-da!  You did it.