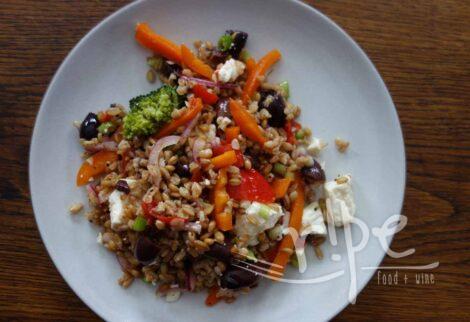 This salad is very satisfying on its own, but sometimes I use it to justify salami for a meal—either on a piece of fresh baguette or sliced and added to the salad. You can also add a couple scoops to a handful of arugula or other greens and have “instant salad” because the vinaigrette is built in!  Of course, an extra drizzle of good olive oil never hurts anyone.

Farro has a chewy texture and delicious, nutty flavor and is high in fiber and protein—you can read more about it here. The farro from Timeless Natural Food is organically grown in Montana and is semi-pearled which shortens the cooking time compared to unpearled wheat berries.

When you’re cooking your grains, there’s no magic. Simmer grains in water and taste to determine if you want them more or less cooked. You don’t have to exactly measure the water, but recipes do usually supply guidelines, so while you’re learning, follow those. If there’s water left when your grains are done, simply drain out the excess. For reference, a cup or two of Timeless farro cooks in about 15 minutes.

When I first tried the “Jimbo’s” recipe from the Timeless Natural Food’s website, I only had about a cup of farro in my pantry. Fortuitously, I had the remains of a bag of sprouted spelt berries from my friend Judy at Conservation Grains, exactly ½  cup! So, I cooked them together in a pot. The spelt remained a bit more firm than the farro, but the mix worked well together. So, this recipe will work great with farro or really any wheat berry, you just might need to cook the grain a bit longer than the time mentioned in the recipe.