Farro with Chestnuts and Butternut Squash 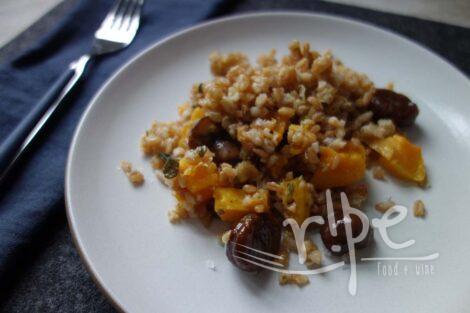 Joyce Goldstein cooked with farro long before ancient grains became a thing.  Hailing from the early days of Chez Panisse, she went on to open her San Francisco restaurant, Square One (1984), where she married Mediterranean techniques with the agricultural bounty of California.  I had the good fortune to attend a few of her cooking classes, and this is my favorite dish.

Farro is a blanket term that refers to ancient varieties of wheat berries (emmer, einkorn, and spelt) that have been pearled (or semi-pearled, which just means that some or all of the bran has been removed from the wheat berry, which cuts down on cooking time) and are intended to be cooked and served as whole grains. Farro has a chewy texture, delicious nutty flavor, and is high in fiber and protein.

I hope you enjoy making this!

Farro with Chestnuts and Butternut Squash