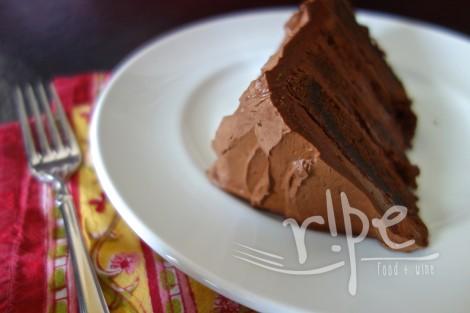 When I want chocolate cake, nothing else will do.  I’ll wait for it.  In fact, I’ve been waiting for six days for this one.  The craving hit last Sunday, but there was no chocolate cake, nor ingredients with which to make chocolate cake.  I fixed both of those issues this week.

The star of this baking session was the frosting, but isn’t that usually the case?  French Buttercream was what I wanted to play with, and it more than compensated for the cake part of the experiment, which was average at best.  (This double chocolate cake remains my favorite for deep-dark, moist, and very chocolatey.  A lighter version is Birthday Cake:  Chocolate.)   Thanks to Alice Medrich and Meg Ray for their respective frosting recipes (Alice’s Chocolate Buttercream Frosting in The Baker’s Dozen Cookbook, and Meg’s French Buttercream from her lovely book, Miette.)

(recipe adapted from originals by Alice Medrich and Meg Ray)